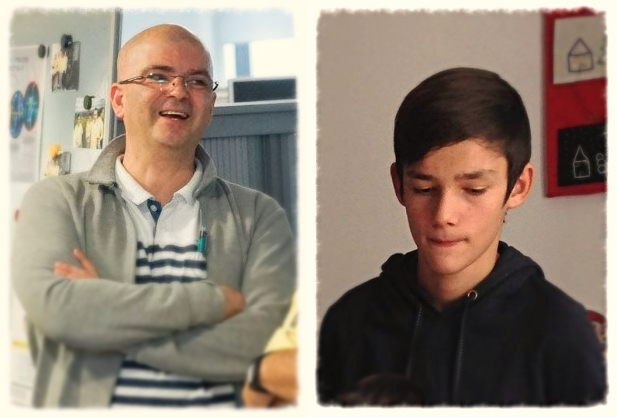 Florian Surcel told himself that, in addition to the monthly donation that provides help to people in need, he wants to do more for the youth who strive to succeed in life, in spite of the problems they have to face. So he decided to become a volunteer in our mentoring and tutoring program to work directly with those who also need an advice, a friend and a perspective for their future. When you set out with many questions and a great desire to do something good, butterflies are to be expected. For Florian, “the task seemed from the beginning both very challenging and touchy enough, and I was even more anxious once I met the people from the center working with the 15 year-old I was going to mentor.”

One October day, Florian first arrived at Casa Florian of the Joyo Foundation, one of United Way’s partners in our education program. After a short visit to get to know the team, the children and the stories they carry with them, Florian became even more excited, but – as he says – full of positive emotions that confirmed him once again that helping these people is indeed a good, human and generous gesture.” This is where he first met the teenager he was about to mentor, let’s call him Cosmin from now on.

Each future mentor is prepared by the United Way team for meeting his mentee, for knowing how to react in various situations in the best way for both participants. The mentor-youth pairs are matched according to the background, affinities and expectations of both parties so that their relationship could be most successful and useful for both sides. Florian says that the connection between himself and Cosmin settled very quickly, naturally and spontaneously. “I was very impressed to see that a 15 year-old, coming from a disadvantaged family, enrolled by his own will in an education program because he wants to learn more, to build a future and overcome the problems that life throwing at him.”

Thus began the discussions, the advices that Florian tries to instill carefully and gently, and most importantly, their special moments together. “Cosmin told me at one point that he likes football, he’s a supporter of Steaua, and he would very much like to see them on the field, but he cannot afford it. So I decided to get in touch with our partner, Western Union, who is also the official sponsor of the UEFA Europa League. I told them Cosmin’s story and I managed to obtain a VIP invitation to the National Arena at the Steaua-Rio Ave match. I didn’t quite tell Cosmin what to expect, I wanted it to be a surprise, so I just invited him to the stadium. I cannot describe the joy in his eyes as he watched his favorite team winning, surrounded by sports celebrities he had seen only on TV and especially when he had a little chat with the President of Steaua himself. It was a really happy evening for both of us.”

Florian is convinced that their friendship will last not only a few months, during the mentoring program, but for a long, very long time because – as he says – “my experiences with Cosmin have strengthened my conviction that if we really want, we can bring joy in the lives of those who deserve it, we can offer not only money or items, but also our time to help the people who need it so much.” Although they both have a busy schedule, they decided to keep in touch over the phone and, at Florian’s invitation, they scheduled their program for the weekend before the holidays. “We will go together in the countryside, to my relatives, to prepare and taste some traditional Christmas specialties, and in the end I want to offer him a holiday basket of goods to bring home to his family.”

Florian and Cosmin’s story started out beautifully and we are excited to see them as they both evolve and learn from each other. Florian is one of the nearly 50 volunteers enrolled in the first round of United Way’s mentoring and tutoring program. Over the following months, we want to share with you their experiences and how they began to change the stories of those they chose to help.