Ania doesn’t know that her home country is in war. ”I came to Romania on vacation” 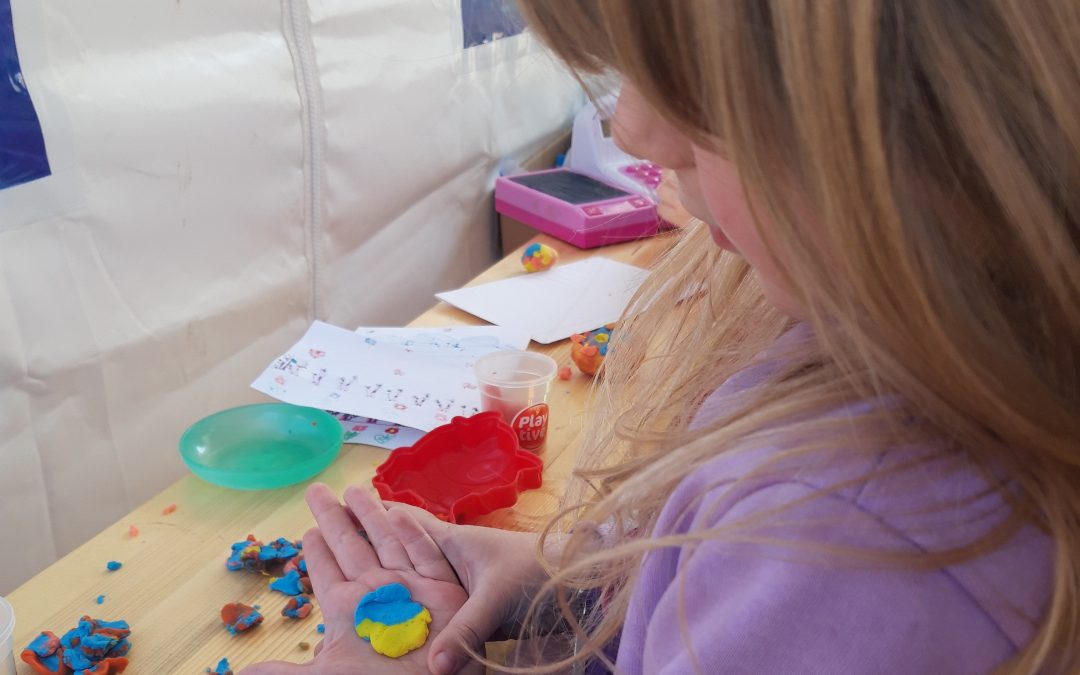 Ania is 5 years old and came from Kyiv to Romania with her mother, Maria. The nearly 1000 kilometers they covered in short segments of journey, by trains and buses. We met Ania in the tent for mother and children, located in the customs in Sighetu Marmației. In this tent, the two waited safely for the time when they would board the train again. This time to Brasov.

In each corner of the tent, there is a place for activities. Ania tested each one. Here she drew, there she modeled playdough, and in another corner she played with soft toys. In the meantime, they had a snack. All this is provided by United Way Romania to refugee children entering in Romania through Sighetu Marmației border.

From Brașov, the mother and daughter will take another train to Bucharest. There they will be hosted by a family.

Ania is a smiling, friendly and cheerful little girl. She doesn’t know there’s a war in her country. Her mother told her that they are going on holiday to Romania, and that her father could not come because he could not take time off from his work.

In peacetime, Maria worked for an IT company in the human resources department. She hopes that once she arrives in Bucharest, she will find a similar job.

At the Sighetu Marmatiei border, United Way Romania provides, through its social partners:

– crisis intervention: providing basic food after crossing the border in Romania (sandwiches, sweets, water, tea, coffee), providing a warm place to rest, emotional support for adults and offering toys to children and the possibility for them to spend time in the arranged play corner;

– providing information on the options they have after arriving in Romania, depending on their plans, to stay in the country or to go to other countries.

Until now, United Way Romania supported over 2.000 refugees at Sighetu Marmatiei Border, most of them mothers and children, needing material, emotional and medical support.

Use the code Ukraine and donate here!

Every donation makes their stay in our country more comfortable and reassures them that the power of humanity overcomes the war!